“A combined effort by all growers to rotate between fungicides is needed to ensure their longevity and we will need to reduce the intensity of barley rotation. We need to think beyond what we’re doing in one season.”

Barley growers on South Australia’s Yorke Peninsula have seen how quickly fungicide resistance can turn from a potential problem to serious threat in the absence of good management practices.

Sam Holmes is an experienced agronomist in the region, where barley has proven to be a reliable and economically successful crop over many years.

In late April 2019, one of his clients planted the barley cultivar Spartacus(PBR) using seed treated with the Group 7 SDHI fungicide fluxapyroxad. Good rain saw the crop emerge successfully in early May.

“I inspected the crop in late May and noticed a little net form of net blotch (NFNB),” Sam says.

“I wasn’t worried because we’d always had reliable protection from that seed treatment, generally until flag leaf, even though dry soil conditions sometimes reduced the efficacy of the seed dressing for short periods.

“We went ahead with a planned herbicide treatment and, four weeks later, the grower called to say the entire crop had turned brown.”

Sam quickly established that the herbicide wasn’t to blame. Rather, the crop was heavily infected with NFNB despite being a resistant cultivar grown from fungicide-treated seed.

“The entire crop was a dull yellow with brown tips; it looked like it had been sprayed with a light dose of paraquat,” he says.

Sam contacted pathologists at the South Australian Research and Development Institute (SARDI) who collected samples and worked with the fungicide resistance group at the Centre for Crop Disease Management (CCDM)– a co-investment by the Grains Research and Development Corporation (GRDC) and Curtin University – to establish that the infection was due to disease strains which had evolved resistance to Group 7 Mode of Action fungicides (SDHIs).

Similar outbreaks were identified in other barley paddocks throughout the area shortly after.

The grower applied treatments of Group 3 (DMI) and Group 11 (strobilurin) fungicides to control the disease through to their 2019 harvest.

Subsequent research by the CCDM showed strains of the pathogen also had reduced sensitivity to Group 3 DMI fungicides, and in some cases dual resistance to both the Group 3 DMIs and Group 7 SDHIs. This means growers may still have experienced difficulty controlling the outbreak, despite using both fungicide MoAs.

Looking back at the season, Sam feels the newly SDHI-resistant strain of NFNB only came to his attention because the pathogen had overcome both the Spartacus resistance to the disease, as well as to the Group 7 SDHI fungicide seed treatment.

“As the region’s agronomists talked to each other, it became apparent that the variety Spartacus made up about 90% of the local barley crop,” he says.

“We had all assumed there was a lot more diversity in what was being planted in the region.”

In addition, several growers had planted a barley on barley rotation and, more specifically, Spartacus on Spartacus. This repeated use of the same resistant cultivar and year-on-year use of SDHI seed treatment had created significant selection pressure favouring the newly resistant NFNB strain.

“Our first response has been to drop Spartacus out of the rotation program,” Sam says.

“It means the 2020 season will be dominated by Compass but we are actively working to add diversity to the program over subsequent seasons.”

He says increasing variety diversity is the main goal for the area’s agronomists, although use of the seed treatment has also been significantly reduced.

“I think we have become very reliant on fungicides, especially as the cost of chemicals is low compared to the benefit they provide and it’s going to be hard to change that mindset” he says.

He also feels educating growers about fungicide resistance and steps they can take to minimise the risks is very important.

“A combined effort by all growers to rotate between fungicides is needed to ensure their longevity and we will need to reduce the intensity of barley rotation,” Sam says.

“We need to think beyond what we’re doing in one season.

“Disease pressure from the previous year’s stubble, including stubble in surrounding paddocks, is just as much of a risk as sowing barley in close rotation.” 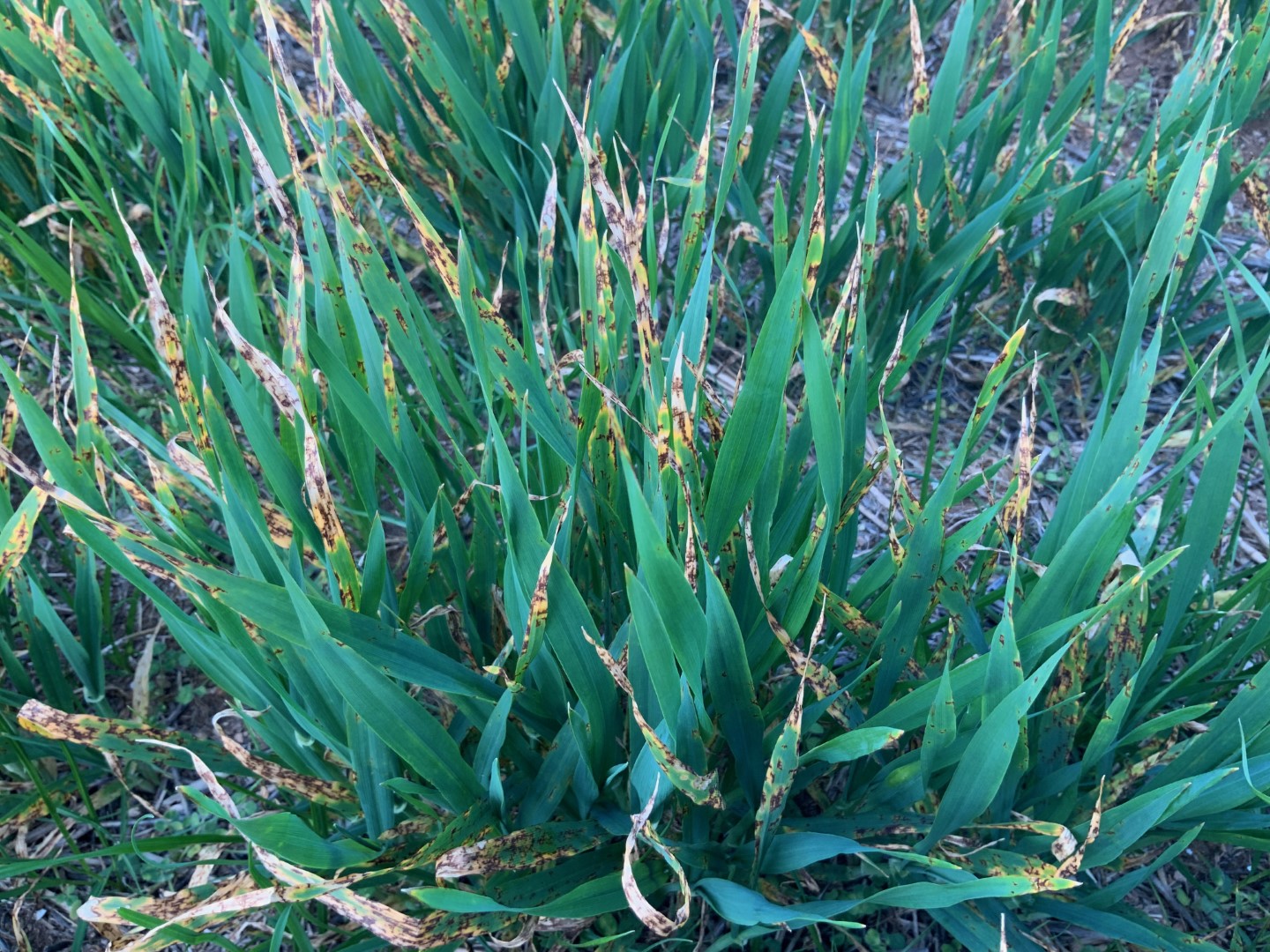 Net Form Net Blotch (NFNB) infecting Spartacus barley on the Yorke Peninsula in 2018, despite the cultivar having disease resistance and the seed having been treated with fungicide. PHOTO: © Sam Holmes. All rights reserved. 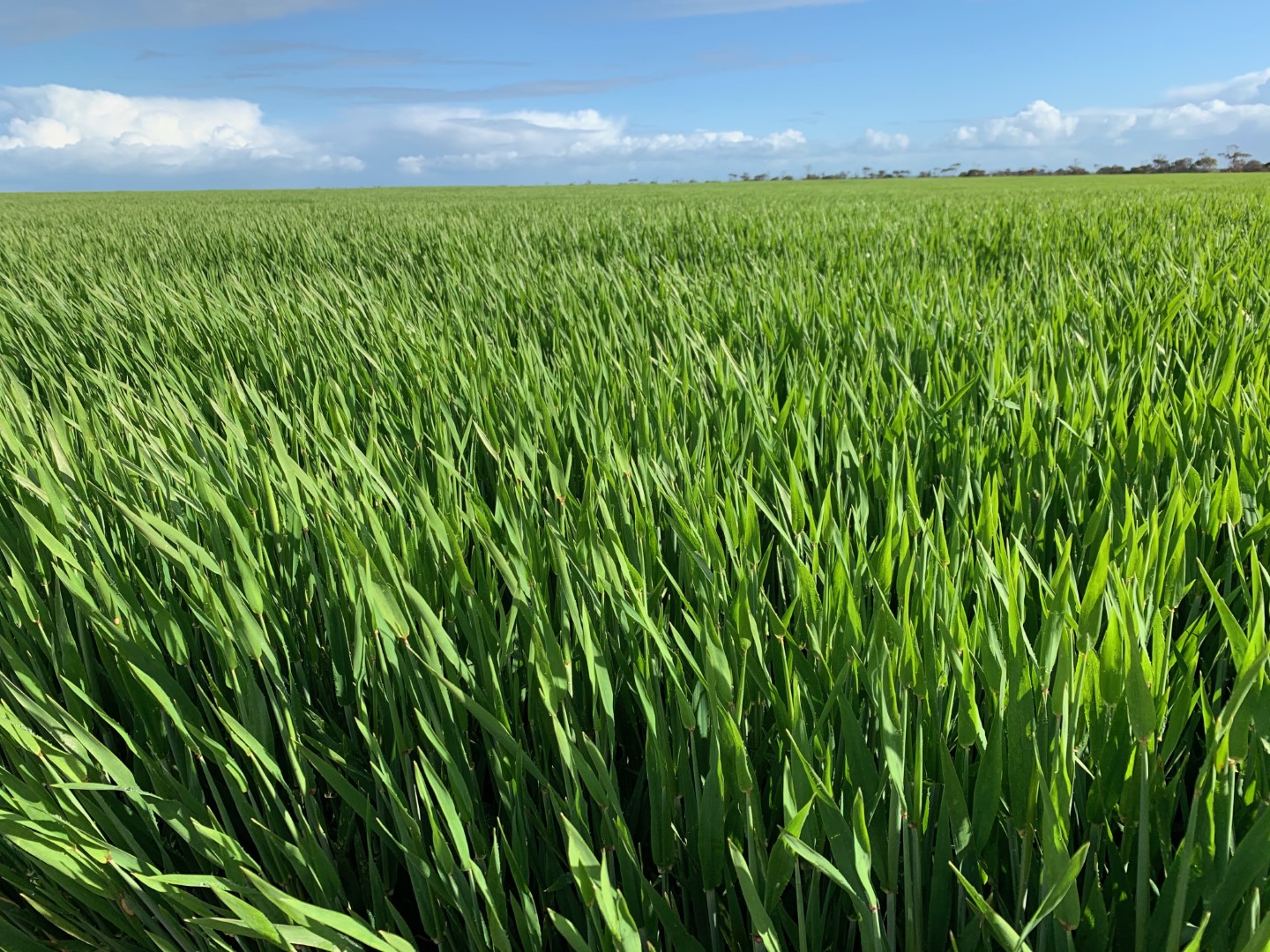 A healthy crop of newly released Maximus barley, growing in the same region during 2020. PHOTO: © Sam Holmes. All rights reserved.