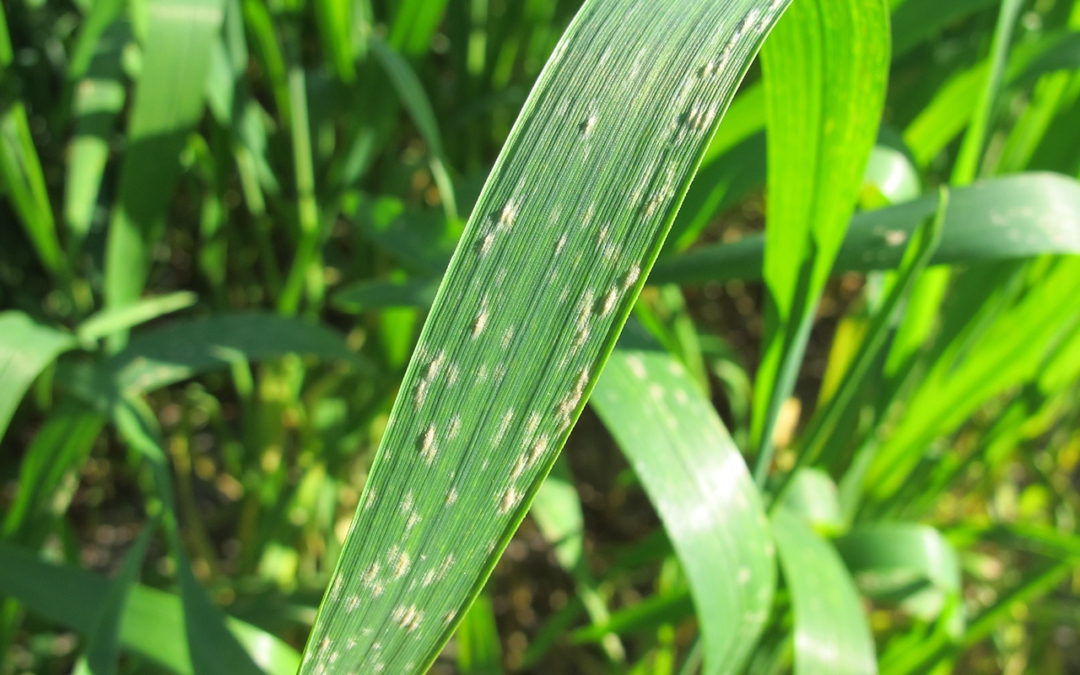 New South Wales and Victorian grain growers are urged to be on alert following confirmation that difficulties experienced in 2020 controlling wheat powdery mildew are linked to resistance of the pathogen to demethylase inhibitor (DMI, Group 3) fungicides.

Fungicide resistance was detected at frequencies ranging from 50 to 100 per cent in samples collected from paddocks around Albury, Rennie, Balldale, Deniliquin and Jerilderie in NSW, and Cobram and Katamatite in Victoria.

Further sampling revealed a wider NSW distribution, from around Hillston and Yenda in south-west NSW, as well as Edgeroi and Wee Waa in northern NSW, in similar frequencies. This marks the first time that resistance in wheat powdery mildew to DMIs has been detected in Australia.

Researchers from the Fungicide Resistance Group at the Centre for Crop and Disease Management (CCDM) – a co-investment by the Grains Research and Development Corporation (GRDC) and Curtin University – confirmed the presence of DMI resistance in a range of samples sent by agronomists who were concerned about disease levels in their clients’ wheat crops during the 2020 season.

The wheat samples from across NSW and into Victoria were from predominantly Vixen bread wheat varieties, and a lower number of durum wheat varieties.

NSW Department of Primary Industries (DPI) cereal pathologist Steven Simpfendorfer says he is not entirely surprised some level of resistance was detected, but is surprised by the high frequency of the detections. He describes the detections as alarming and a wake-up call for industry.

He says that the reliance on DMI fungicides by many growers in the region over many years contributed to selecting for the fungicide resistance detected during this past season.

Strong collaborative networks were key to the rapid detection of this case of wheat powdery mildew DMI resistance.

Agronomists and growers collected 40 samples from 20 paddocks across NSW and Victoria and these were analysed by CCDM researchers in the laboratory.

Director of the CCDM, Mark Gibberd, praised his colleagues and collaborators for how quickly and effectively they worked together to detect this case of resistance.

CCDM researcher Steven Chang says genetic and phenotypic analyses of the wheat powdery mildew pathogen isolated from the samples showed a combination of mutations in the DMI fungicide target gene that were associated with the resistance observed to some DMIs. Additionally, all samples tested had some level of strobilurin fungicide (Group 11) resistance.

CCDM’s fungicide resistance group leader Fran Lopez-Ruiz says CCDM researchers have run a monitoring program for fungicide resistance in wheat powdery mildew for many years. Thanks to this, they could determine that the mutations now found in NSW and Victoria were the same as those previously detected in Tasmania and SA.

The Australian grains crop protection market is dominated by only three major mode of action (MoA) groups to combat diseases of grain crops in Australia: the DMIs (Group 3), SDHIs (Group 7) and strobilurins (or quinone outside inhibitors, QoIs, Group 11). Having so few MoA groups available for use increases the risk of fungicide resistance developing, as growers have very few alternatives to rotate in order to reduce selection pressure for these fungicide groups.

With two of the three fungicide MoA groups now compromised in some paddocks in NSW and Victoria, all growers need to take care to implement fungicide resistance management strategies to maximise their chances of effective and long-term disease control.

Growers and agronomists who suspect DMI reduced sensitivity or resistance should contact the CCDM’s Fungicide Resistance Group at frg@curtin.edu.au. Alternatively, contact a local regional plant pathologist or fungicide resistance expert to discuss the situation. A list of contacts is on the AFREN website.

Further information on fungicide resistance and its management in Australian grains crops is also available via the AFREN website.